Credit Keri Brenner http://o2.aolcdn.com/dims-shared/dims3/PATCH/resize/273x203/http://hss-prod.hss.aol.com/hss/storage/patch/44a239b7ac1d48930d4180fd23a82fc7
While the rest of the nation was glued in front the Super Bowl game telecast Sunday, Monique Lessan was urging people on her Facebook page and blogs to watch a CNN-TV expose on underage girls being abducted and sold for sex online.
"My purpose in life is to keep children safe and bring them home to their parents," said the Persian-born Lessan, who has brought abducted children home from places such as England, France, Singapore and Mexico.  "If I can make the world a little safer, then for me it is heaven on Earth."
Lessan is the founder of Healdsburg, Calif.-based "Teens against Human Trafficking," and proprietor of Healdsburg-based private investigation firm Eye Investigate International, which specializes in recovering abducted children from all over the world.
Lessan, licensed since 1993, also does criminal defense investigations, missing persons searches, background checks, asset searches and adoptee and adopter discoveries.
"Despite her size and her sex, she is formidable, brave and truly a force for good in the world," said colleague Patricia V. Davis, a Marin County, Calif. resident,  author of the memoir, "Harlot's Sauce," and editor-in-chief of HS Radio.
Like Lessan, Davis is a member of Santa Rosa, Calif.-based Redwood Writers group, where Davis said she was struck not only by Lessan's non-traditional profession, but also that she came to the work through her own personal tragedy -- being kidnapped and assaulted by an older stranger at age 24.
"Monique Lessan is an inspiration to all women," Davis said. "She took something negative in her life -- her own kidnapping -- and turned it into her strength and life's work, which is to save others from the same fate."
With an ironically assigned PI license number "16-007,"  the exotic-looking Lessan has been featured as a female James Bond-type protagonist on various TV spots and was screened earlier this month for a possible reality TV show on the Discovery Channel.
At the beginning of this year, she signed a publishing contract to write a memoir of her most significant child abduction cases, some of which she completed in conjunction with the National Center for Missing and Exploited Children.
"My last child abduction case, in 2008, involved a Chinese mother of a 10-year-old boy, whose father, originally from Dublin, Ireland, abducted the boy," said Lessan, who researches her cases online and works as a team with a network of surveillance and investigation contractors in each locale. "We found the boy in San Diego, and, after two days of surveillance, it took only 24 hours to reunite him with his mother."
Lessan, who speaks French, Spanish and Farsi in addition to English, has gone undercover on numerous occasions, using disguises ranging from "a student to a Persian princess -- I've done it all," she said. "I could be someone who's very rich with a lot of money, or just someone who needs to use the bathroom" just to get inside the house and investigate what secrets may be inside.
As she explains in series of videos she produced last year with a group of Healdsburg High School students, most young people aren't aware of how easily they can be lured into the clutches of people who would take advantage of them.
Lessan should know.  Her own kidnapping was by a rich Iranian artist who pulled up beside her on at street corner in Santa Monica and lured her into his car with promises of money for modeling and a job in his gallery. A half-dozen mixed drinks later, he took her to a hotel and assaulted her.
"I didn't have the money to pay the rent," recalled Lessan, now 40-something. "I was unemployed, working odd jobs and as a movie extra -- I thought he would give me a job and money."
She escaped a day and a half later, after excusing herself to go to the ladies room at a restaurant and never coming back. But the experience changed her life -- and her career choice -- forever, she said.
"When I became a PI, I said I would never allow anyone to go through what I went through," she said. "It's one of the reasons I do what I do."
Lessan said she only spoke publicly about the incident for the first time last year when she was working with the Healdsburg High School students. She has since included it in the first draft of her book.
"Monique has an important story to tell," said Peter Beren, Lessan's publishing agent and consultant. "The story of the dark side of the global economy --human trafficking."
Who's your female role model? Tell us in the comments.
Posted by Dublo7 at 2:14 PM No comments:

SELLING THE GIRL NEXT DOOR 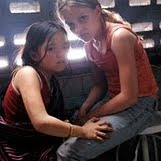 Message from SAGE
Please tune into CNN this Sunday, February 6, 2011 for “CNN Presents: Selling the Girl Next Door.” Airing at 8:00 pm EST and 5:00 pm PST, this documentary exposes how hundreds of thousands of girls under 18 are sold as sex slaves in the U.S. In a yearlong investigation, CNN's Amber Lyon reveals the devastating realities of the business of underage sex.
The CNN website has posted a video of CNN reporter Amber Lyon posing as a 12 year old girl for sale on the internet. Please cut and paste the following link into your browser to view this revealing video: http://www.cnn.com/video/#/video/bestoftv/2011/01/19/siu.selling.the.girl.next.door2.cnn?iref=allsearch
Prostitution is often misperceived as a voluntary choice made by consenting adults.  The reality is tragically different.  The prostitution industry is fueled by the sexual exploitation of children. As of 2009, the FBI has estimated the average age of entry into prostitution in the U.S. as 12 years of age[1].
Every year, thousands of girls are recruited into prostitution, introduced to highly addictive drug use, and trafficked to major tourist cities across the United States.  San Francisco’s historic Gold Rush roots in human trafficking continue to this day, making the City a prominent home to this exploitative, abusive and illegal practice.
A 2002 study by the San Francisco Coalition to End the Exploitation of Kids (CEEK) estimated that there are at least 3,000 prostituted children in San Francisco alone. Each and every one is a trafficking victim. And each and everyone one needs our help to escape their situations. They say it takes a village to raise a child. Well, it takes the support of the entire community to rescue a trafficked child.
Posted by Dublo7 at 11:56 AM No comments:

On behalf of Sage

By Barbara Grady for Oakland Local
Friday, January 21, 2011
A massive prostitution ring spanning the Bay Area was busted Thursday when 125 law enforcement officers from six cities, three counties and the federal government descended on 10 locations, served search and arrest warrants and arrested eight people on charges of operating the ring.
More arrests are expected, investigators said, and charges may include human trafficking of immigrants. The eight arrested, whose names were not released, have been charged with conspiring to operate a prostitution ring.
Hayward Police Department led the operation and launched the investigation that led to the arrests about a year ago when some Hayward residents complained of suspected prostitution at a neighboring house. Hayward police officers found evidence supporting the claim, as well as evidence suggesting that the Hayward home was part of a larger ring of brothels all around the Bay Area.
The investigation widened to involve police from Oakland, Berkeley, Sunnyvale, Newark, Danville and San Jose as well the Federal Bureau of Investigation, Internal Revenue Service and the sheriff offices of Alameda, Santa Clara and Contra Costa counties - all working under a multi-agency process set up by the Alameda County DA’s Human Exploitation and Trafficking Watch program.
They uncovered an operation described by the Alameda County District Attorney’s office as “a sophisticated ring of brothels where scores of immigrant Asian women are exploited to further the ring’s lucrative enterprise.”
The investigation is ongoing, officials said, and expects to indentify more suspects and victims. Investigators esitmated that "dozens of women have been brought into the United States" from Taiwan and China and "cycled through these targeted Bay Area brothels."
About a half dozen nonprofit social service and human rights organizations helped in the operation, particularly in providing services to victims identified by the police.  Ten women were recovered from the operation yesterday, investigators said. Organizations helping them include Asian Community Mental Health, Standing Against Global Exploitation, Bay Area Women Against Rape, Women Inc. and Community Violence Solutions.
“Yesterday's multi-agency operation, stemming from the Hayward Police Department investigation, is a testament to this regional commitment,” said Sharmin Bock, Assistant District Attorney in charge of Special Operations and Policy Development and head of the HEAT Watch Unit. "This is a historic operation" because of the number of agencies involved and because it was the first conducted under the new regional law enforcement cooperation process set up by the HEAT Watch program.
"Efforts of this magnitude and this degree of collaboration by local, state and federal law enforcement and service providers are unprecedented and bode well for future efforts to successfully combat the HEAT epidemic plaguing our region," Bock said.
Link: http://oaklandlocal.com/article/eight-arrested-east-bay-operating-huge-prostitution-ring
SAGE Project, Inc.

http://www.eyeinvestigate.com
Posted by Dublo7 at 2:59 PM No comments: