A JOB OPPORTUNTIY IS WAITING FOR YOU OVERSEAS 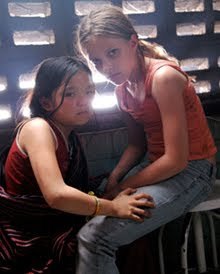 Natalya lives in a small village in Moldova, one of the poorest countries in Eastern Europe. A single mother of two young girls, she must also take care of her sick brother, and struggles to find work in her economically depressed town. Natalya’s neighbor Katerina tells her of an employment opportunity in Odessa, Ukraine, with a local bar owner. Katerina says she can get Natalya work as a waitress in a bar and offers, for a fee, to help arrange Natalya’s travel to the northern port city.
Within a few weeks, Natalya is on a plane to Odessa, eager to make money and support her brother and daughters. However, once she arrives, Natalya realizes that she has been horribly deceived—that there never was a bar, or waitress job, and that Katerina—her neighbor and friend, has helped to sell her into sexual slavery. The bar owner turns out to be a small-time criminal and pimp, and the bar is his brothel. Before she has time to process what’s happened, her passport is confiscated and she is driven from the airport to a cramped apartment where she—along with a dozen other young women— will stay for the duration of her servitude.
First, she is raped by the pimp who claims he must “try out the goods” and Natalya has her first taste of the violence and degradation that is to follow. Before long, she is forced to service more than a dozen clients a day—business men, locals, and tourists—interested in quick sex for cash. After several months of sexual abuse and physical violence, Natalya is mentally and emotionally destroyed and is resigned to her position. Eventually a friendly client “buys” Natalya from her pimp, and sends her home. But once back in Moldova, it is apparent that there is no work in her small village. The only answer, thinks Natalya, is to prostitute herself in the Moldovan capital of Chisinau. “I am already broken, after all….”
Defining TraffickingSex trafficking is the exploitation of women and children, within national or across international borders, for the purposes of forced sex work.1 It includes the recruitment, transportation, harboring, transfer or sale of women and children for these purposes.
Each year, an estimated 800,000 women and children are trafficked across national borders.2 According to the U.S. Federal Bureau of Investigation, human trafficking is estimated to annually generate 9.5 billion dollars of revenue.3 Furthermore, the U.S. Department of Health and Human Services concluded that human trafficking is now tied with the illegal arms industry as the second largest criminal industry in the world today.4
According to the United Nations Development Fund for Women and the United Nations Inter-agency Project on Human Trafficking in the Mekong Sub-region, sex trafficking appears to be growing in scope and magnitude, with increasing numbers of countries involved due in large part to globalization and the relative ease with which traffickers are able to transport victims between countries.5
Sex trafficking is a widespread problem, implicating nearly every country in the world:
Around 75 percent of all human trafficking victims are trafficked for sexual exploitation.6
About two million women and children are held in sexual servitude around the world, but many experts believe the actual number of trafficked peoples is upwards of 10 times as much.7 Because of its clandestine nature, it is difficult to determine the magnitude of human trafficking. According to the Dutch National Rapporteur Against Trafficking in Human Beings, only around 5 percent of trafficking cases are ever reported.8
An estimated 120,000 women and girls are trafficked into Western Europe each year.9
There have been reports of sexual trafficking in at least 20 U.S. states, with most cases occurring in New York, California and Florida.10 Once issues of domestic trafficking are included, all 50 states would be implicated.
An estimated 14,500 to 17,500 women and children are trafficked into the U.S. each year.11 And at any given time, there are 30,000 – 50,000 sex slaves in the United States.12
Sex trafficking fuels the commercial sex industry, which includes both legal and illegal prostitution.
Sex trafficking happens in both public and private locales. In some cases, trafficking victims are highly visible and engage in street-level prostitution, but in most cases, sex trafficking takes place in underground venues, such as private homes or brothels. Often, public and legal locations such as massage parlors, spas and strip clubs will be a front for illegal prostitution and trafficking.13
Human trafficking is sometimes called the “new slavery,” because it retains many of the same characteristics of a slave (trafficking victim)/master (trafficker) relationship. In the new slavery, women and girls are purchased cheaply and sold to customers at a high profit margin. Rather than serve one master or in one locale, victims are passed around among a variety of “owners.” And because of the seemingly endless supply of women and girls, slaves are ultimately disposable.14
Many countries lack tough anti-trafficking legislation and even when legislation is in place, laws are often not enforced. Relatively few trafficking cases are prosecuted, and of those, very few result in convictions. Fear and shame keep many women and girls from seeking help, and widespread police corruption, exemplified by Thailand and Russia, makes it unsafe for trafficking victims to approach local and national authorities.15
Occasionally, women and girls are rescued from traffickers and receive support, care and compassion. More often, though, trafficking victims are treated like criminals by the police. Women and girls arrested in trafficking circles are often processed as illegal immigrants rather than trafficking victims, and are immediately deported to their home countries where, because few economic alternatives exist, they begin the cycle of trafficking and exploitation all over again.
Posted by Dublo7 at 10:05 PM

Please help spread the word about the initiative to strengthen human trafficking laws in California.