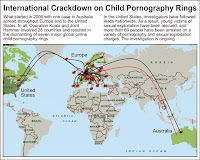 From Headline Archive page of the Federal Bureau of Investigation

What started as a tip from Australian authorities in 2006 regarding a sexually explicit video has turned into one of the largest global child pornography investigations on record—and a model for how law enforcement cooperation can cast a powerful light into the darkest reaches of the Internet to bring child predators to justice.
Operation Joint Hammer has resulted in the rescue of 14 girls—some as young as 3 years old—who were being sexually abused by pornographers. Approximately 170 people have been arrested, more than 60 of them U.S. citizens. Seven major child pornography rings, hosting the worst of the worst, have been dismantled. And the investigation is far from complete.

Working with international law enforcement organizations, members of our Innocent Images National Initiative program are playing a key role in the operation, along with the Department of Justice (DOJ), the United States Postal Inspection Service (USPIS), and U.S. Immigration and Customs Enforcement (ICE).

Here is what happened: Authorities in Queensland, Australia came across a pornographic video online showing a young victim. This victim was determined to be Dutch with a Flemish accent. Authorities in Belgium were contacted, and the ensuing European investigation became known as Operation Koala.
Belgian police identified and arrested the molester, who provided information about the video’s producer, an Italian national who ran a pornographic website. When Italian police arrested the producer and shut down his website, they retrieved 50,000 e-mails to the porn site. Those e-mails formed the basis of Operation Joint Hammer. They were routed by Europol to the 28 countries from which they originated—with more than 11,000 coming from the United States.
The Innocent Images Operations Unit, along with our U.S. partners, quickly got to work. From the U.S. e-mails, about 700 became workable investigative leads. These were divided between the FBI, USPIS, and ICE. DOJ’s Child Exploitation and Obscenity Section, responsible for prosecuting the federal cases, also played a critical role. As the investigation proceeded, many of our state and local law enforcement partners participated, conducting searches and making arrests.
The investigation is ongoing, but already dangerous sexual predators have been stopped:

A New Jersey man pled guilty to producing sexual images of his 9-year-old daughter. Evidence seized during the search of his home revealed that he had nearly 130,000 images of child pornography. He was sentenced to almost 20 years in prison.

An Arizona fifth-grade schoolteacher was a customer of the Italian pornography website. A search of his home resulted in allegations of sexual contact with female students at his school. He faces multiple charges of sexual exploitation of children.

So far, the FBI and our U.S. partners have conducted more than 250 searches as part of the operation. “We’re still working our way through all the cases,” said our agent in charge of the investigation.
“Cooperation is the key,” the agent added. “During our regular meetings with postal inspectors, ICE, and DOJ, we do whatever needs to be done as a team to make sure the cases keep moving forward.”
Resources